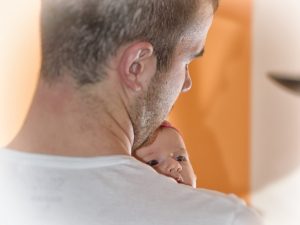 Stephen Vicoli is a father of a 16-year son and an 18-year old daughter. He lights up when you ask about them. Stephen is also in recovery. Like many fathers who struggle with substance use disorder, his relationship with his children suffered.

His substance use led to a court order that prevented him from having contact with his daughter. That was when he knew he needed to find a pathway to recovery. In 2011, he entered The Healing Place. Today, he is an alumni of THP and CARITAS Works graduate. He helps other men find a pathway to sobriety as the Transition Coordinator of THP.  Since, he’s reconnected with his children.

“That relationship has been fantastic,” Stephen said with a smile.

He talked about the restoration of their relationship as well as his son’s upcoming birthday. There are still tough moments, but he’s thrilled to have them back in his life. He’s one of many men at THP who are fathers. A new partnership will help them strengthen their relationships with their children.

CARITAS and The Richmond Family and Fatherhood Initiative (RFFI) teamed up in May 2016. Each week, 20 to 25 men meet in the conference room at THP. They work through the curriculum of the new program during a span of 21 weeks.

“The life skills are coupled with fatherhood development skills like understanding a child’s development and understanding a father’s influence,” Stephan “Coach” Hicks said, director of My Brother’s Keeper. Coach has been a certified facilitator since 2013.

How CARITAS partnered with RFFI

The partnership began after Stephan led a tour of The Healing Place for Richmond City Health Director Danny Avula. Danny recognized that fathers in THP might need additional help reconnecting with their children and suggested RFFI as a partner. Anthony Mingo, the RFFI Coordinator, soon joined Stephen bring the concept to life.

Today, the Fatherhood Initiative course covers topics including trauma, resilience, co-parenting and more based on best practices developed by the National Partnership for Community Leadership.

Coach has facilitated the course around the Richmond area, seeing value in partnering with other community organizations. He facilitates five classes each week between four locations, including My Brother’s Keeper, Bon Secours, Richmond City Justice Center, and The Healing Place.

“It’s not so overwhelming, the idea of addressing my deficiencies as a parent in this group,” Stephen said.

Fathers in The Healing Place

The program is open to both current THP clients and THP alumni. Steven explained that many participants are recruited through word of mouth. Others are referred by agencies and organizations including social services.

“Substance use gets in the way of being an effective parent,” Stephen said. “There are a whole lot of men who stand to benefit.”

Stephen sees the positive impact in those around him. Men who come to the meetings become regulars. The men not only share their fatherhood experiences and learn from one another, but they develop connections between one another.

The program acts as a support system for the men, no matter what they’re going through. From court, to co-parenting challenges to birthday parties, the class helps men work through real life situations.
“A lot of them keep in contact with me after they complete the program requirements to seek advice and resources.” Coach said. “I couldn’t be more blessed.”

To learn more about the Fatherhood Initiative, click here.