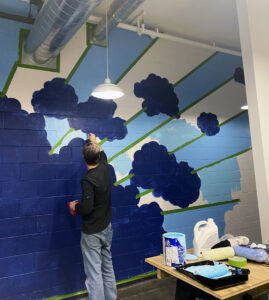 On the first Monday of 2021, artist Matt Lively set out his paint and brushes.  Four other artists joined him to paint their own mural concepts throughout the freshly opened CARITAS Center.

“My heart was in it immediately,” says Lively after receiving a hard hat tour of the facility. “Right away, I wanted to get other artists involved,”

Stevie McFadden, the founder of commercial and residential interior design firm Flourish Spaces, reached out to Lively as the project neared its end. With the support of her team, McFadden has guided the transformation of the former Philip Morris Blended Leaf plant, which had laid vacant for so long, into a space to recover. Just a year ago, the building was covered in colorful graffiti art. Other than graffiti artists, it’s only visitors were skateboarders and firefighters practicing among the broken glass and piles of dusty rubble.

Before photo of the CARITAS Center.

“On the surface, you have this building that is so broken and abandoned,” she says. “Over time, it had become a canvas for people who found some beauty in the brokenness. I wanted to capture some of that and integrate that into the final design.”

McFadden herself led Lively through the center and explained the programs to him.

“From people coming in, to getting them recovery services, to teaching them work skills, to learning how to do job interviews, and all the way to the apartments, I thought it was so thorough,” he says.

Insulation and paint now cover much of the graffiti, but high-resolution digital imagery of it was translated into wall-coverings that will be placed in strategic areas of the building. The 150,000 square foot building still has many bare walls that McFadden says left the building feeling “cold.” 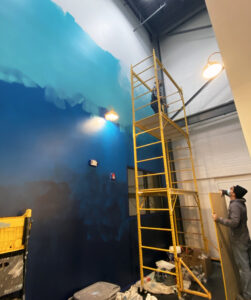 “One of the principles of Alcoholics Anonymous is ‘Attraction versus Promotion,’” says McFadden. “This is a program that needs to attract clients, make them feel welcome, and reinforce a message of healing and worthiness. Mass expanses of institutional, industrial, and cold corridors don’t convey that. We thought that engaging local muralists to fill these vacuous spaces not only created moments of beauty and design cohesion, they also served as moments to reinforce important messages that reinforced the programming or mission.”

Lively and his fellow artists—Amy Smith, Heide Trepaneir, Miguel Carter-Fisher, and Shaylen Amanda Broughten—developed concepts to fill some of the larger passageways and hallways in the building. Each artist brings his or her own experience with substance use disorder in some way.

“As someone who has/is personally going through the process of recovery, healing from past trauma and substance use, this project is extremely personal to me,” writes Broughton in her concept proposal. “The images I have created are meant to evoke a sense of peace, healing, and transformation.” 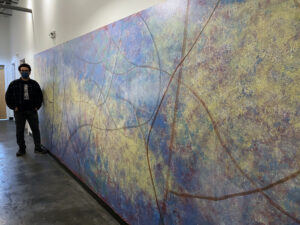 Artist Miguel Carter-Fisher next to his completed mural, inspired by the Serenity Prayer.

The CARITAS Center project earned a Golden Hammer award from Historic Richmond and Storefront for Community Design in November 2020. It is located at 2220 Stockton Street, an area where Richmond is hardest hit by addiction, crime, prostitution, and poverty. People in need can easily access services in their own community at this new facility.

Just like the city the building calls home, Lively says he sees the CARITAS Center as a place that will become inherent with Richmond’s identity, murals and all.

Learn more about the CARITAS Center.