This is a big week for Casandra. Tuesday, December 28, marks her three-year sobriety date. Thursday, December 30, is her birthday! The past year has included many other milestones for Casandra, as well. She helped open The Healing Place for Women (THPW), beginning as a founding peer mentor.  Today, she leads our recovery program for women as THPW Program Coordinator.

“I love being able to be a part of seeing the light come on in other people’s eyes,” Cassandra says. “I get to show others there is hope and that the pain they feel when they first come doesn’t last  forever.” 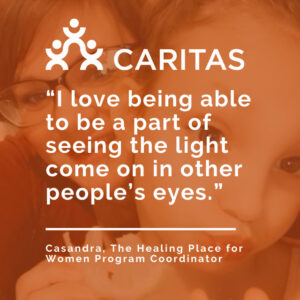 Since December 2020, 188 women have walked through the doors of our recovery program at the CARITAS Center. Each one shares a journey of hope.

Casandra’s own substance use disorder began with her first few drinks in 2005 just before she turned 21. A car accident in 2008 resulted in an oxycontin and morphine prescription to help ease the pain of a shattered ankle and knee.

“I never felt like I had a problem because a doctor was prescribing them to me,” she says.

Her addiction eventually led her to sell drugs, which led to jail and losing custody of her daughter. Rock bottom came when she planned to commit suicide. The pens she attempted to steal to write her suicide note actually saved Casandra. She was arrested for stealing. Eventually, a judge allowed her to enter a long-term recovery program in Kentucky much like The Healing Place. 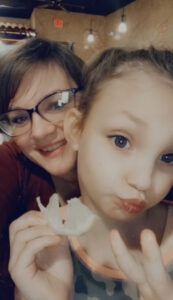 “That was three years ago this week,” she says. “I needed every single day of the long-term program to learn how to live life without substances.”

Today, she says, she’s grateful to be part of the magic unfolding at CARITAS. The participants share her gratitude, too.

“Just the other day, there was a participant who was crying because she was so overwhelmed with how much the community was doing for us,” Cassandra says. “A lot of times, we don’t feel like we deserve nice things. I get to tell these women they deserve it all.”

Donate to support our work.