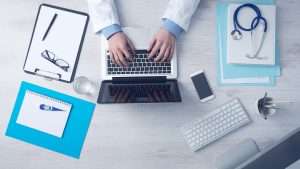 Ethan remembers the day his mother dropped him off at The Healing Place in 2009. He had left his wife and five children behind to seek help. When he arrived, he was surprised to learn that it was a recovery program for homeless men. He thought that it wasn’t the right place for him, though he had lost his home and struggled with addiction for 15 years.

He decided to step outside to call his mother to return to pick him up. She didn’t answer. Then, it started to rain. He was told about an AA class being held inside, so he decided to step in to stay dry.

“There was a gritty gentleman leading the class,” Ethan said. “I remember his presentation distinctly–it was all about his family.”

Ethan realized how much stress he had been putting on his family because of his addiction. He felt immature and helpless.

“That was what changed my mind to stay,” Ethan said. “Whatever I needed to do to stay, I decided I was going to do.”

Ethan committed to working through the 12-step peer-to-peer recovery program. He developed a brotherhood he still keeps in touch with daily. Ethan thinks about the things he learned at The Healing Place every day.

How He Got There

Ethan started drinking when he was 16.  A tumultuous family environment led him to take on adult responsibilities at an early age. He started working and dropped out of high school.

“It wasn’t a problem until it became a problem,” he said. “Unfortunately by then, I had a family and the stakes were much higher.”

Ethan’s father died from his own alcoholism. Ethan knew it would be his fate if he continued. He tried several times to get sober on his own. Eventually, he lost his nursing assistant job as a result of his addiction. As his money ran out, stress levels rose at home.

“I had a genuine intention of getting sober,” Ethan said. “I finally learned that I couldn’t do it on my own.”

The Healing Place program worked for Ethan because of the men he met who had come before him. They carried themselves with strength and confidence. Ethan came into the program feeling insecure and guilty.

“They were so purposeful about everything they did,” Ethan said. “I wanted to be like that. I wanted other people to see me like that, especially my family.”

While Ethan was finding hope at The Healing Place, his wife and five children also needed help. They found a safe place to live at the CARITAS Shelter. Two weeks before Christmas, Ethan left The Healing Place to be with his family in the shelter program. They celebrated the holidays with CARITAS that year.

While at the shelter, Ethan was able to focus on searching for a job. He soon found a nursing assistant job and started saving money. A member of the host congregation had a rental home he was waiting to fill with new tenants. He invited Ethan and his family to stay there at no cost for a few months while they saved money and searched for a home they could afford.

“We hit the ground running hard,” Ethan said. “You learn so much about accountability at The Healing Place. Excuses don’t matter. I knew I had to make it happen.”

They moved into a home they have now been living in for six years. The CARITAS Furniture Bank helped fill the home with essentials for his family so they could continue to focus on finding stability. Ethan’s wife went back to school while he worked long hours to keep the household afloat. Once his wife had completed schooling and secured her first job as a nurse, Ethan began volunteering and working toward his own educational goals.

“None of my efforts would have manifested the way they did with out CARITAS,” Ethan said. “They gave us what we needed to start standing on our own two feet.”

Ethan just finished his last semester at Virginia Commonwealth University with a degree in biology and minor in chemistry. Ethan found out just before Christmas 2016 that he was accepted to VCU’s School of Medicine.

“It was CARITAS that got me here,” Ethan said. “I owe them everything.”

Though he is hard at work preparing to start classes, Ethan makes time to volunteer at the CARITAS Works clothing closet a couple afternoons each week. There, he gets to connect with men in The Healing Place program.

“Dress for Success day is a great way to meet the guys,” Ethan said. “It’s symbolic. Some of those guys have never worn a suit. I like the idea that a person with a history of addiction or homelessness doesn’t have to be that person for the rest of his life.”