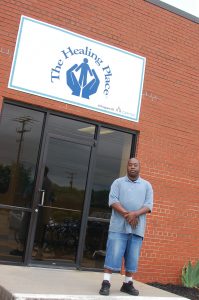 At age 23, Steve fell 30 feet onto a concrete slab while working on a construction site. He broke both of his elbows and he describes his foot as merely hanging on by skin after the fall. He endured nine surgeries to put himself back together after the accident.

The weeks following his accident, he remained in the hospital to recover. His doctors prescribed Demerol for the pain.  All Steve had to do was push a button to ask for more—once every three hours.  It was as easy as asking for more water or food, he said.

Eventually, doctors prescribed Steve Oxycontin, another opioid-based medicine, to “wean” him off the Demerol. Doctors also referred Steve to a psychiatrist and suggested Tylenol as a good alternative once he left the hospital.

“I had never done drugs in my life,” Steve said.

Before he even made it home to recover, Steve began asking around about how he could get something to feed his addiction. He tried crack cocaine and other opiates. Thanks to a structured lawsuit settlement from the accident, he easily funded his new drug addiction.

Last June, Steve knew it was time to get sober.  He also realized he needed a lot of help. He found his way to The Healing Place in December 2015. He has gone through non-medical detox and the first two phases of the program. Steve is now in the “Phase” part of the program, what we know as the “heart” of the recovery model at The Healing Place. We look forward to watching him grow and build a new life for himself and his family.

Steve’s story reflects many at The Healing Place—addiction caught hold of him when he least expected it. Luckily many hospitals in Virginia are working to update opiate prescription guidelines to reduce the likelihood that people like Steve unknowingly become addicted to a drug and find themselves hunting for heroin on the streets. Learn more about the new guidelines here.

Even as partners like hospitals work to do their part to prevent addiction, the impact of this epidemic will last for generations to come. CARITAS and The Healing Place will keep its doors open 24/7 for those ready for help.