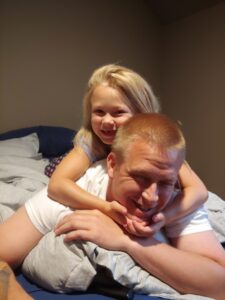 “My favorite thing about being a dad is the connection between me and her– the unconditional love connection that we have,” says The Healing Place Program Operations Manager Justin Woods. This dad has a lot to do every day at CARITAS. He’s in charge of making sure men are able to successfully begin their journey at THP and that they have everything they need during their time staying with us. He also mentors and manages our peer mentor team.

“Every day is different, but I wouldn’t change it at all,” he says.

Justin is an alumnus of THP and he understands just how life-changing the program can be. Justin grew up surrounded by family–seven brothers and sisters to be exact.

In highschool, he played basketball but still felt like he wanted to fit in more. Alcohol and drugs became an answer. When he was 18, he broke his leg and ankle. The doctors prescribed pain medicine.

“By then, I was already smoking weed, partying, going to bars, and then I started the pain pills thing,” he says.

Soon, he was taking more and more. He began selling the pills. In the midst of his growing addiction, his girlfriend became pregnant. His daughter Kinsley was born in August 2014. Later that month, his mother passed away.

“I thought having a daughter would keep me clean and sober, but after my mom passed away, everything went out of the window and I couldn’t control my addiction.”

After several felony convictions,  a trip to jail in January 2017 started his recovery journey. When he was released in May 2017, a family friend shared his story about coming through The Healing Place.

“I told my parole officer: If I don’t do this, I’m going to die,” Justin says. “It was uncomfortable and I was scared, but I knew it was the path for me.”

Soon, he realized it was much more than a short-term program and one he’d want to be a part of for many years.

“I began making close friends and building bonds with people — I wasn’t used to that,” he says. “I never had genuine friendships and after all of these years, these THP friendships still sustain me every single day.”

Toward the end of the recovery program, he began the CARITAS Works program. Here, he learned he may want to pursue a career in substance use counseling.

As he completed the program, he accepted a position as a Peer Mentor at the Healing Place. He moved on to become the Peer Mentor Supervisor, then Program Coordinator, and today he is the Program Operations Manager. He’s also a dad.

“My father was absent, I didn’t want to repeat that cycle for my daughter,” he says. “My main goal is to be present every day.”

The Healing Place regularly offers The Fatherhood Initiative, an 8-week class to help dads transition to being fathers after getting sober. Justin was one of our first students.

“I learned so much about my past trauma and how not to let that impact my daughter’s upbringing,” he says. “I learned how to be a dependable father.”

Today, Kinsley lives with Justin. They go fishing together, he takes her to competition gymnastics practice, and they do homework together.

“I even paint fingernails,” he says.

We’re proud to have Justin on our team at CARITAS.