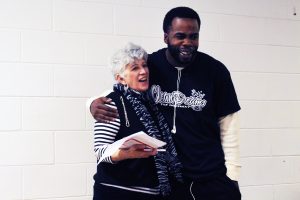 “I’ve only ever saved money in a shoebox before,” said Moe, a CARITAS Works graduate and CARITAS AfterWorks participant.

Before he found his way to CARITAS, Moe had been using and selling drugs for years.

“I would be dead or locked up by now if it weren’t for these programs,” Moe said.

Toward the end of  The Healing Place program, Moe entered CARITAS Works to learn job and life skills. The intensive five-week, eight hour a day (160+ hours) career preparation and job placement program helped Moe gain stability and transition successfully from a life of crime to one full of hope. He’d never held steady employment before. In January, Moe will celebrate his two-year anniversary at his new job.

“Because of this process,” Moe said, “I can live like a productive member of society.”

After graduating from CARITAS Works, Moe became a part of AfterWorks, a two-year support program for all of our Works clients. It is designed to maintain the connectivity necessary for long-term success. Each month, men come together for the innovative and supportive program in which CARITAS staff members cover topics including budgeting, computer skills, and more based on the group’s needs. 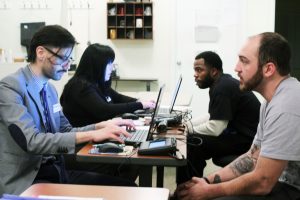 On December 7, Moe was one of 34 men and women who were able to open savings accounts during a celebratory AfterWorks session, thanks to a United Way THRIVE Grant CARITAS received this year. Associates from Call Federal Credit Union volunteered to help each person set up an account. Depending on how many AfterWorks sessions each had attended, CARITAS  Works Program Manager Marilyn Milio awarded participants a first deposit of $60 to $400. Moe was a top earner and also was able to take home a laptop to further help his career growth.

Men and women who graduate from Works often have had very little experience managing personal banks accounts for a variety of reasons, from cancer, to chronic homelessness, to cycles of crime and prison. A combination of Works and the long-term connectivity of AfterWorks help them transition into a life of stability, happiness and renewed connections with friends and family.

“We’re joined at the hip these days,” Moe said as he lit up talking about his 16-year old daughter.

“I look forward to her phone calls and doing whatever I can to help her now. There was a time when I didn’t want to pick up that phone because I knew I couldn’t help her.”