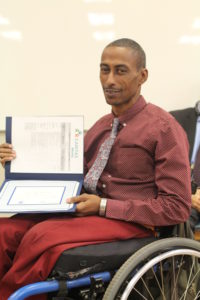 Paris first tried heroin when he was 18.

“Me and my friends were trying to get into the drug game,” he said. “We could go to the club and see all the big boys and try to emulate them: jewelry, cars, and drugs.”

The “big boys” would sniff heroin and cocaine, he said. One night, he tried a sniff of heroine.

“I threw it up, but it felt so good,” he said. “It was better than cocaine and I wanted more right away.”

Eventually, Paris said, he didn’t have a choice about whether or not he wanted to get high. It was a physical need.

He grew accustomed to a life of addiction: regular gunshots in his neighborhood, incarceration, abandoned cars and crack houses. Eventually, Paris himself was shot four times in his chest over a drug territory dispute. He was paralyzed and had parts of his stomach, and lower intestines removed. Even after all of the physical therapy and pain, “that obsession was still so strong.” He was using as soon as he left the hospital.

One day, he and a friend met up to buy and use heroin. He went home high and woke up in an ambulance. A girlfriend discovered him unconscious in his home. Once Paris was stabilized,  the hospital referred him to The Healing Place. Here, Paris met other men in the recovery program and started to see what a life in recovery would bring him. He also saw the “Death Board,” which is a collection of photos of men who “knew but didn’t believe.”

“I was looking on the board and I saw this picture of the guy I used with the day I overdosed,” he said. “We took the same exact drugs. The only difference was there was someone to find me and no one checked on him for two days.”

That moment led Paris to commit to coming back to The Healing Place. He first had to serve time in prison for violating his parole. While in jail, he wrote to The Healing Place and asked if he could return. He took a bus directly there the day he was released. 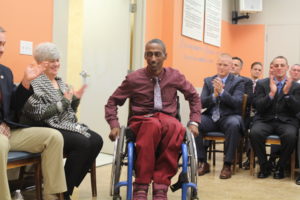 Since that day, Paris has completed the recovery program and also graduated from CARITAS Works. He says he’s transformed and grown in so many ways.

“The Healing place will work on you without your permission,” he said. “You just have to stay still and trust the process. I didn’t go in there with any expectations. All I wanted to do was not get high, not to use, and not to die in the streets.”

Paris found recovery and much more. He said he remembers the first time he felt and expressed real emotions for someone else. He saw a friend’s family come visit him for his CARITAS Works commencement ceremony. He couldn’t help but cry.

Once he entered CARITAS Works, he was excited and nervous for the work ahead. He had never turned on or used a computer before, sat in an interview, or writen up a resume. The first week was the hardest, he said. Then, he got into a flow and saw the possibilities unfold.

Since graduating, Paris has been working to share his story as a public speaker and working to get into school.