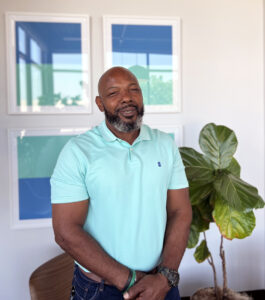 Tyrone is the Program Coordinator for The Healing Place For Men. He has four children and is now a grandfather.

“One of the best feelings I get to have is that I can show guys like me that they can make amends with their the families and stay on the right path,” he says. “Staying on the right path means no more interruptions that take you away from your family.”

Tyrone knows what it’s like to lose precious time with his family because of his substance use disorder. He grew up in Richmond, VA. He says he had good mentors and stayed out of trouble through high school. In his 20s, he began drinking, smoking, and eventually tried heroin. By this time, Tyrone had children.

“I was working, but I was suffering in other ways,” he says. “I definitely was not spending time with my family like I should have been.”

Tyrone attemped to get sober through short-term programs. Nothing stuck. Eventually, Tyrone was arrested for various drug possession and distribution charges. He spent time at Indian Creek Correctional Center, which infused a peer-driven recovery program into his daily life. After he was released, he was sober and excited.

“I had a plan to continue this journey, but I struggled when I got out with employment and housing, so I returned back to selling for income and headed back down a road of destruction,” he says.

A friend who had been to The Healing Place, suggested he give it a try.

“What stuck with me most about the program was that I didn’t have to worry about housing, food, or clothes,” he said. “I could focus on me and get more solid spiritual foundation and support finding employment.”

Tyrone did that and more. As a graduate of CARITAS Works Class 59, Tyrone learned about his strengths and how he wanted to spend his life. He chose to commit to giving back every day at CARITAS.

“I am always trying to get guys to embrace change and demonstrate what recovery can look like through role modeling,” he says. “One of the best ways as humans we can help others is to show love for and help them and expect nothing in return.”

Tyrone has held several positions at CARITAS and is a leader for both participants and staff today. He spends as much time as he can with his four children and his seven grandchildren.

“Father’s day means a lot to me because I’m able to have memories now that I will remember,” Tyrone says.

Happy Father’s Day to Tyrone and all of our CARITAS dads!